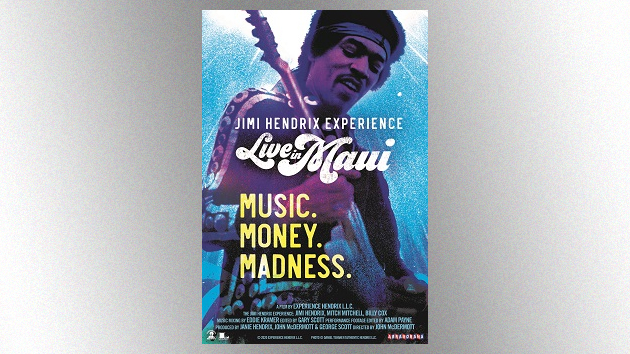 Music, Money, Madness…Jimi Hendrix in Maui, the 2020 documentary focusing on two legendary 1970 shows that the Jimi Hendrix Experience played in Hawaii, will be screened in select U.S. theaters on various dates in February.

The documentary, which originally was released on Blu-ray in November 2020 in conjunction with the companion album Live in Maui, tells the story of how Hendrix and his band traveled to the island of Maui during the summer of 1970 to participate in the making of the movie Rainbow Bridge by playing two free outdoor concerts on the slopes of the dormant Haleakala volcano. The shows, which took place on July 30, were attended by a few hundred local residents.

Only 17 minutes of the footage from the two sets were used in Rainbow Bridge, a poorly received 1971 movie directed by Andy Warhol associate Chuck Wein that focused on various counterculture figures on the Hawaiian island. Music, Money, Madness…Jimi Hendrix in Maui incorporates previously unseen footage from the performances and the band’s visit to the island, as well as new interviews with Experience bassist Billy Cox, Hendrix engineer Eddie Kramer, Wein, a number of Rainbow Bridge cast members and Warner Bros. label executives.

The first theatrical screenings of the documentary are scheduled for February 1 in various California cities, as well as Buffalo, New York; Oklahoma City; and Tacoma, Washington.

A special screening will be held on February 16 in Los Angeles at The Regent Theater that will feature a Q&A and conversation with Kramer, director John McDermott and Experience Hendrix CEO Janie Hendrix, Jimi’s sister.

Visit JimiHendrixMaui.com for more information about the screenings.