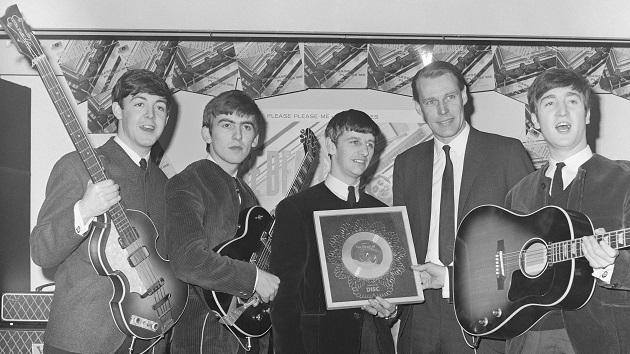 Giles Martin, son of late Beatles producer George Martin, has shared a touching archival family video that shows his dad telling Giles’ young daughter the story of how he wound up working with the Fab Four.

The clip, which Giles posted on his Twitter feed, shows his elderly father — who died in 2016 at age 90 — sitting on a couch next to the young girl, who appears to be about six years old.

George starts by telling his granddaughter that when he was first told about the band, he thought their name was silly, but it was then explained to him that it wasn’t Beetles, but Beatles with an “a.”

George then explains that he felt he needed to hear the group before deciding to work with them, so they came down from Liverpool to London to meet him.

“And when I listened to what they did, it was OK, but it wasn’t brilliant. It was OK,” George continues. “So I thought, well, ‘Why should I be interested in this?'”

He then notes, “But the magic bit came when I started to get to know them, because they were terribly good people to know. They were funny, they were very clever, they said all lovely things. And they were the kind of people that you like to be with.”

In a note that accompanies the video, Giles — who has overseen and produced many recent Beatles-related projects — writes, “Ordinary people do extraordinary things. Great decisions are made for the simplest reasons.”