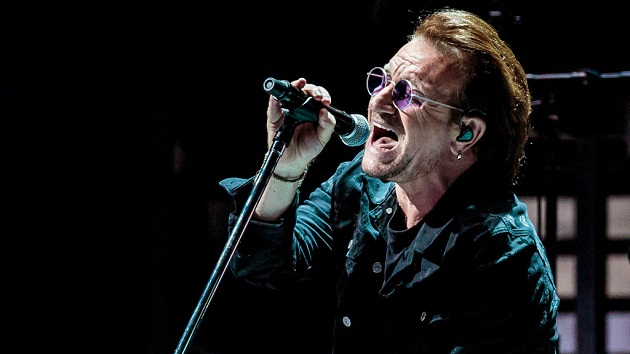 When it comes to a way to like his own voice, Bono still hasn’t found what he’s looking for.

On a new episode of The Hollywood Reporter‘s Awards Chatter podcast, the U2 frontman says he feels “embarrassed” when he hears his singing, particularly on the group’s earlier recordings, explaining that, while he thinks the his band mates sound “incredible,” he finds his voice to be “very strained.”

“I’ve been in a car when one of our songs has come on the radio and I’ve been the color of, as we say in Dublin, scarlet,” Bono says. “I’m just so embarrassed.”

During the interview, Bono shares a story about a fellow rock star who had a similar disdain for the U2 frontman’s voice, the late Robert Palmer. He says Palmer once approached U2 bassist Adam Clayton and griped, “God, would you ever tell your singer to just take down the keys a little bit? He’d do himself a favor, his voice a favor, and he’d do us all a favor who have to listen to him.”

Bono adds that he feels he “only became a singer, like, recently.”

“Maybe that hasn’t happened yet for some people’s ears,” he laughs. “And I understand that.”

Another thing Bono isn’t all that jazzed about: the name U2.

“I still don’t really like the name,” he says. Guitarist The Edge adds that they only picked U2 in the first place because, of the potential candidates, it was the one they “hated the least.”

While Bono may have his own issues with his voice, that doesn’t seem to be bothering the voters for the Oscars, who placed U2’s new single “Your Song Saved My Life” — from the animated film Sing 2 — on the shortlist to be nominated for Best Original Song.