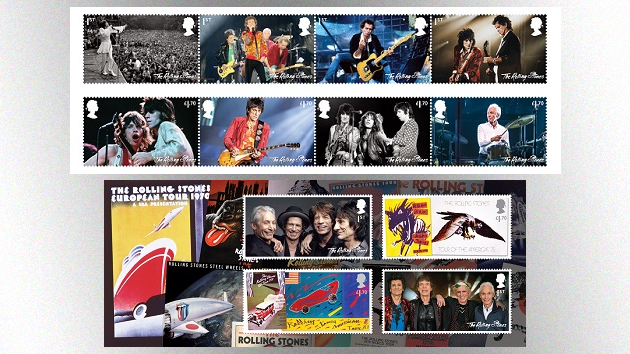 Royal Mail, the U.K.’s postal agency, is paying tribute to The Rolling Stones with a series of postage stamps and other collectible items to mark the band’s 60th anniversary this year.

Twelve different stamps honoring the British rock legends are being issued, and will be released on January 20.

A main set will feature eight stamps celebrating Rolling Stones live performances, and featuring photos of the band in concert on various tours in different cities.

A separate miniature sheet will feature four other stamps, two of which boast photos of the band’s core four members — including late drummer Charlie Watts — while the other two feature images of posters from select Stones tours.

The stamps will be sold in a variety of configurations and sets, some of which are available with collectible ingots or medals commemorating select tours or eras in the band’s history.

All of the various Stones stamp sets and collectibles can be pre-ordered now at RoyalMail.com.

“Few bands in the history of rock have managed to carve out a career as rich and expansive as that of the Rolling Stones,” says Royal Mail official David Gold. “They have created some of modern music’s most iconic and inspirational albums, with ground-breaking live performances to match.”

The Rolling Stones become the fourth rock band to be honored with a series of postage stamps by Royal Mail, following The Beatles, Pink Floyd and Queen.