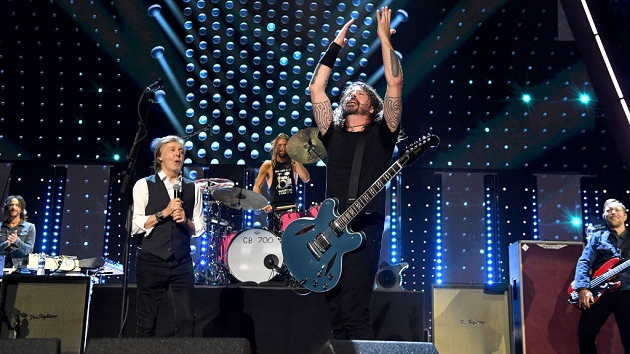 After the in-person ceremony was replaced by a virtual special in 2020 due to the COVID-19 pandemic, the Rock & Roll Hall of Fame Induction gala returned this year in full force with a star-studded event held October 30 at Cleveland’s Rocket Mortgage FieldHouse.

Here are some of the evening’s many highlights:

—Paul McCartney inducted Foo Fighters, and compared frontman Dave Grohl‘s post-Nirvana career to his own time in Wings, noting, “We had a great time with our groups, but eventually tragedy happened and my group broke up. Same happened with Dave. His group broke up under tragic circumstances. So the question is, what do you do now?”

The Foos performed “Everlong,” “Best of You” and “My Hero” before taking the podium. Grohl delivered a short acceptance during which he thanked his band and crew family, and his actual family. Drummer Taylor Hawkins campaigned in his speech for the eventual induction of Soundgarden and George Michael.

The night concluded with McCartney and Foo Fighters jamming on the Beatles classic “Get Back.”

–Rundgren, who’d said for many years that if inducted, he wouldn’t attend, pointedly booked a concert in Cincinnati on the night of the ceremony. He was virtually inducted by Patti Smith, who has known Todd since their twenties. A tribute video included commentary from  Daryl Hall and The Bangles‘ Susanna Hoffs.

—Drew Barrymore inducted The Go-Go’s and paid homage to the cover of the all-female group’s debut album, Beauty and the Beat, by wrapping her hair in a bath towel and applying face cream, emulating the album’s cover image. “Beauty and the Beat blew the doors of my life off,” she told the crowd.

While the group accepting their honor, bassist Kathy Valentine said now that The Go-Go’s had been inducted, they’d be “advocating for the inclusion of more women.” The band then rocked the crowd with “Vacation,” “Our Lips Are Sealed” and “We Got the Beat.”

–Turner and King became the second and third women to become two-time Rock Hall inductees, following Stevie Nicks in 2019. Tina was first inducted in 1991 as one half of Ike & Tina Turner. Welcoming her as a solo performer was actress Angela Bassett, star of the Turner biopic What’s Love Got to Do with It. Tina didn’t attend the event, instead sending a pre-recorded thank-you video.

King, who’d been inducted as a songwriter in 1990, was ushered into the Rock Hall this time by Taylor Swift.

—Ringo Starr appeared via pre-taped video to induct Preston, who famously played and recorded with The Beatles during the making of Let It Be.