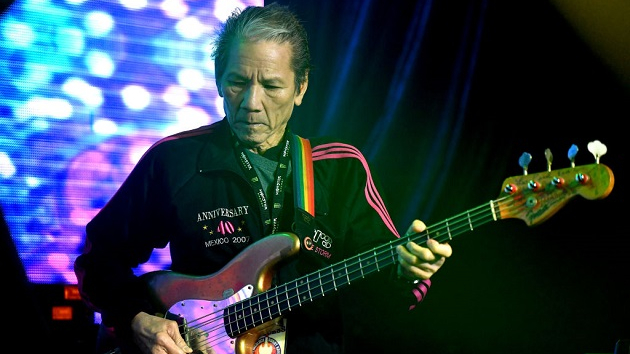 Phil Chen, a Jamaican-born session bassist whose long list of credits include recordings with Rod Stewart, Jeff Beck and members of The Doors, died on Tuesday, December 14, after “a long battle with cancer” at age 75.

Chen’s passing was announced on his official Facebook page in a message that reads, “He spent his final days surrounded by family and close friends and cherished time with his grandchildren who always brightened his day. He will be missed greatly and his contagious passion for music and positive energy on and off the stage will be remembered always.”

Phil played on Beck’s acclaimed 1975 album Blow by Blow, and on three albums by Stewart during the late 1970s and 1980. He also was a member of Robby Krieger and John Densmore‘s post-Doors project The Butts Band, and later joined Krieger and Doors keyboardist Ray Manzarek in some of their post-Doors groups.

Regarding the project, Robby said, “[Phil’s] been down with mesothelioma lately, so we wanted to do something that would make him happy.”

Krieger posted a tribute message about Chen on his Facebook page that reads, “Aside from his extraordinary musical talent, Phil was an incredible human being who would do anything for a friend and always brought a smile to whatever situation he was in.”

Among the many other artists with whom Chen collaborated are Donovan, Pete Townshend, Jackson Browne, John Fogerty, Eurythmics and Queen‘s Roger Taylor.