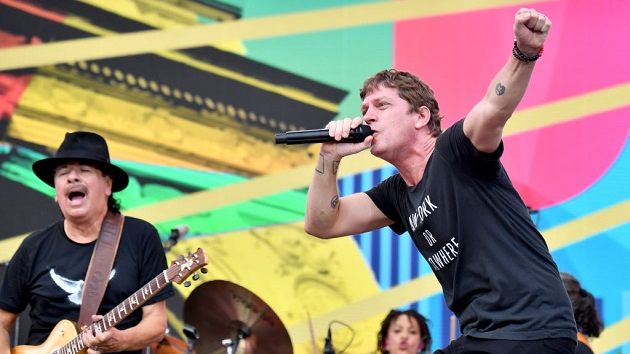 Trying to follow up one of the biggest songs of the last 20 years or so is a tall order, which is why Rob Thomas says he isn’t concerned about whether or not “Move,” his new duet with Carlos Santana, is as successful as their first duet, “Smooth.” But Rob says the reason he specifically doesn’t worry about that stuff is because of some advice that Carlos gave him 21 years ago.

“I’m three years younger now than Carlos was when we first did ‘Smooth,'” Rob tells ABC Audio. “And at that very, very young age, Carlos taught me something that was very, very important that I hold on to, which is: The world is not as complicated as you make it seem sometimes, and you really are only in control of your motive, your intention and your purpose.”

According to Rob, Carlos told him, “Those are the three things that you can control. And whatever the outcome is, that’s going to be the outcome, but you can’t worry about it while you’re putting something into [the universe].”

“So, I don’t think I’ve ever really been concerned about whether something was going to perform,” Rob says, addressing the topic of “Move’s” success versus that of “Smooth.”

“When I do something and I’m creative and I’m listening to that frequency in the universe that gives me a song, then I feel like I’ve already succeeded,” the Matchbox Twenty frontman states. “And I think the only time that I fail is if I stop listening to that — or I start trying to control it.”

In addition to “Move,” which in addition to Carlos also features American Authors, Rob has a new holiday album out, Something About Christmas Time.