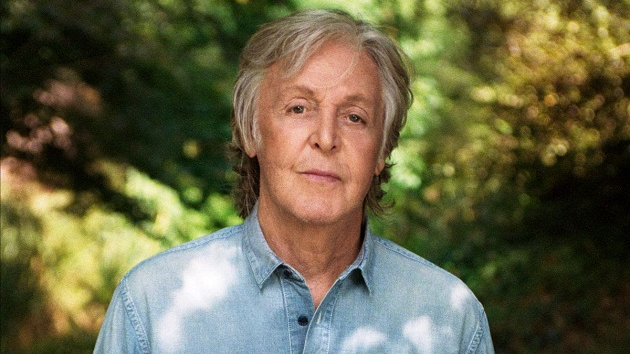 Paul McCartney has posted a video on his Facebook page capturing him sharing an emotional confession during a recent livestreamed Q&A event promoting his new book The Lyrics.

In the segment, Paul says he never told his late Beatles band mate John Lennon that he loved him.

“As 16-year-old, 17-year-old Liverpool kids, you could never say that. It just wasn’t done,” McCartney explains. “So I never did. I never really just said, ‘John, love you, man.’ I just never got ’round to it. So now, it is great to just realize how much I loved this man.”

The event, which took place November 5 at London’s Southbank Centre, is available on demand for streaming through Saturday, November 12, priced at $14.

In other news, McCartney and his daughters Mary and Stella have joined animal-rights organization PETA U.K. and other celebrities in calling for the United Nation’s COP26 climate-change conference, which is taking place now in Glasgow, Scotland, to adopt the Plant Based Treaty initiative, which is designed to focus on food systems as a way to battle the global climate crisis.

The McCartneys, PETA U.K. and others issued a message Tuesday to the COP26 delegates urging them to adopt the treaty, which seeks to encourage the production of more plant-based foods rather than meat, as a companion to the Paris Agreement climate-change treaty adopted in 2015.

Paul, Mary and Stella, who launched the Meat Free Monday campaign in 2009, say in a statement, “We believe in justice for animals, the environment and people. That’s why we support the Plant Based Treaty and urge individuals and governments to sign it.”

Among the other celebs supporting the treaty are Moby, Joaquin Phoenix, Rooney Mara and Game of Thrones actor Jerome Flynn.

“I never really said ‘John I love you man’, I never got round to it. So now it’s great to just realise how much I love this man…”
‘The Lyrics: Paul McCartney in Conversation’ is available to watch on demand till November 12th: https://t.co/yoJhfzbs3o @PenguinLive pic.twitter.com/WdsmwqfzbG