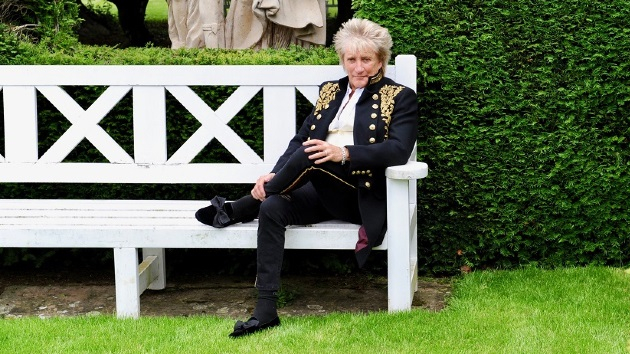 Rod Stewart has debuted a third track from his upcoming studio album The Tears of Hercules, an upbeat and romantic pop-soul tune called “I Can’t Imagine” that the singer has dedicated to his wife, Penny Lancaster Stewart.

The song is available now as a digital download and via streaming services, and you also can check out a new companion music video at Stewart’s official YouTube channel.

The clip captures Stewart performing the song and having fun with his band members and backing singers at a large lakeside mansion outside of Las Vegas. “I Can’t Imagine” is one of nine songs that Rod co-wrote on the 12-track album, which is due out next Friday, November 12.

Stewart will be promoting The Tears of Hercules with a number of TV appearances in the coming week. On Monday, November 8, he’ll be featured on Entertainment Tonight, while on November 12, the album’s release date, he’ll perform and be interviewed on The Kelly Clarkson Show and The Late Show with Stephen Colbert.

The Tears of Hercules can be pre-ordered now, and is available on CD, as a vinyl LP and in digital formats.

“I Can’t Imagine” follows the release of two other advance tracks co-written by Stewart, the country-pop gem “One More Time” and the introspective and topical gospel-influenced ballad “Hold On.”

Stewart recently wrapped his latest Las Vegas residency at The Colosseum at Caesars Palace, and his next engagement at the venue is scheduled for May 2022. First up for Rod is a tour of Australia and New Zealand taking place in March and April.