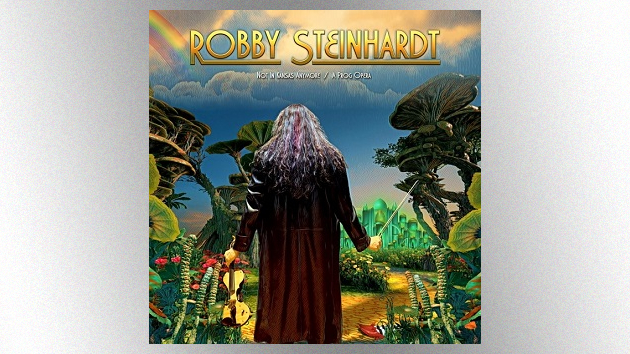 Longtime Kansas violinist and vocalist Robby Steinhardt sadly passed away in July of this year, but not before recording his debut solo album, a star-studded collection of songs titled Not in Kansas Anymore, which was released posthumously this week.

Not in Kansas Anymore includes a new rendition of Kansas’ classic 1978 hit “Dust in the Wind.” The album was produced by Michael Franklin, who also worked on former Yes singer Jon Anderson‘s similarly star-packed 2019 solo effort, 1000 Hands: Chapter One.

Not in Kansas Anymore is available for purchase now on CD and digital formats at RobbySteinhardtOfficial.com or SolarMusic.com. You also can pre-order a vinyl LP version of the record, which is due out in December.

In the only interview he gave about Not in Kansas Anymore, Robby explained to PBS about the album’s title, “It’s no slight against the band, no never! My time with Kansas defined a big part of my life, of which I am very proud of. Ever since The Wizard of Oz, those words have become an American axiom for moving forward, you can never go back etc. I guess it has a special meaning when it is fixed to me.”

Steinhardt died on July 17 from complications of pancreatitis. He was 71.

Here’s the full Not in Kansas Anymore track list: