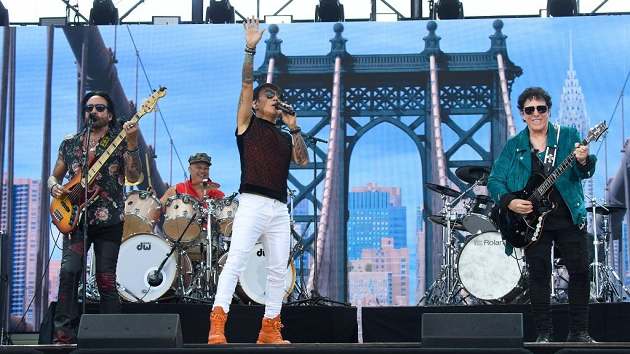 Journey has been preparing a new studio album, and now comes word that the forthcoming release will be supersized.

Narada Michael Walden, who replaced longtime Journey member Steve Smith as the band’s new drummer last year, and also is producing the new record, posted a message Friday on his Facebook page revealing that he was in the studio with Neal Schon “wrapping up the exciting new Journey double album.” He added, “Stay tuned.”

On the same day, Schon posted a video on his Facebook page showing him laying down a guitar track, along with the message, “We had some fun today as I replayed all Guitar’s [sic] on this 1st track we cut over a year ago when we began the new Journey album. It’s a [wrap]!”

Journey gave fans the first taste from the upcoming album in June with the release of their latest single, “The Way We Used to Be.”

In addition to Walden, the new album marks the return of bassist Randy Jackson, who previously played with Journey in the mid-1980s, and of drummer Deen Castronovo, who was a member of the group from 1998 to 2015.

While no release date has been announced for the album, Schon told ABC Audio in July that he expected it to come out either at the end of this year or in early 2022.

Meanwhile, Journey is preparing to kick off a six-show Las Vegas residency at The Theater at Virgin Hotels Las Vegas in December. The dates are scheduled for December 1, 2, 7, 8, 10 and 11. The band also will be playing a special symphonic concert on December 18 in Vegas at The Colosseum at Caesars Palace.