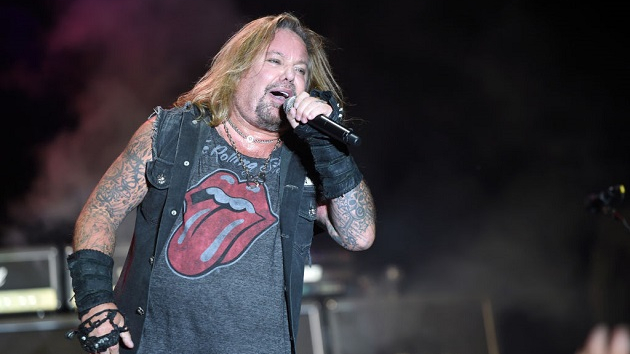 Mötley Crüe frontman Vince Neil is recovering from broken ribs after falling off the stage during his performance with his solo band on Friday at the Monsters on the Mountain festival in Pigeon Forge, Tennessee.

“Vince is back home and resting after breaking a few ribs on Friday night,” a message on Mötley Crüe’s Twitter feed reads. “Our love and best wishes for a speedy recovery and ready to rock in ’22!!”

According to TMZ, the incident happed a few songs into Neil’s set when he accidentally stepped off the edge of the stage and fell about four feet onto a cement floor.

TMZ reports that Vince, 60, was helped to his feet by his roadie and a security guard, and then was taken to a local hospital via an ambulance.

According to the website, Neil’s band finished up the set with guitarist Jeff Blando taking over lead vocals.

A video of the accident posted on the Metal Sludge Twitter feed shows Neil falling into a gap between the stage and the monitors. A separate fan-shot video showing a different angle of Neil’s tumble has been posted on YouTube.

Next year, Mötley Crüe is slated to team up with Def Leppard, Poison and Joan Jett & the Blackhearts on The Stadium Tour, a major U.S. trek that’s is slated to kick off June 16 in Atlanta. The tour originally was supposed to have taken place in 2020, then was postponed until this year because of the COVID-19 pandemic before being pushed back yet again because of the ongoing health crisis.

Another close up of Vince Neil’s scary fall last night at ⁦@MonstersOfRock⁩ ⁦@MonstersCruise⁩ Monsters on the Mountain concert. #getwellsoon pic.twitter.com/HUx0NeAlT9