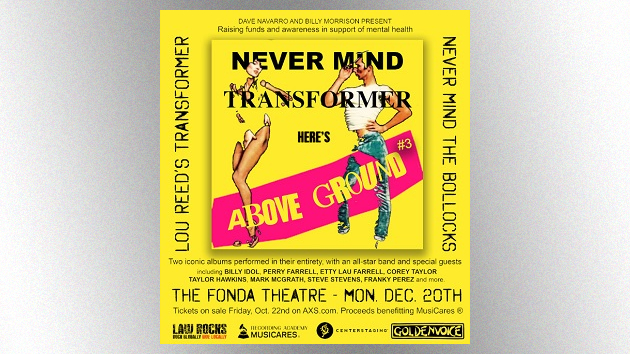 Dave Navarro of Jane’s Addiction and Billy Idol guitarist Billy Morrison have announced plans for a 2021 edition of their Above Ground benefit concert.

The annual event, which raises money for the MusiCares charity, was previously held in 2018 and 2019, but was put on hold in 2020 because of the COVID-19 pandemic. It’ll now make its return this year at The Fonda Theatre in Hollywood on December 20.

As with previous years, the Above Ground performers will play songs off two seminal albums. This year’s selections are Lou Reed‘s Transformer and Sex Pistols‘ Never Mind the Bollocks, Here’s the Sex Pistols.

You can check out a video of Navarro and Morrison talking about this year’s show at the Above Ground organization’s YouTube channel.

Tickets go on sale to the general public this Friday, October 22, at AXS.com.