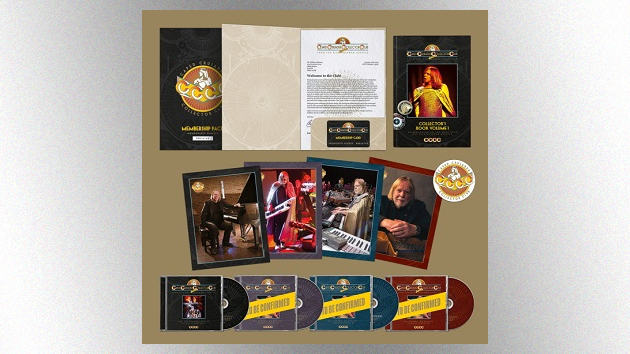 Former Yes keyboardist Rick Wakeman has just launched a new club for his fans called the Caped Crusader Collector Club that will offer members the chance to receive and purchase a variety of rare recordings and memorabilia.

Those who sign up for the CCCC, as Wakeman calls the club, will receive a membership pack that includes an individually numbered membership card; a welcome letter signed by Rick; a sticker; four 8″ by 10″ photos; and an exclusive yearbook boasting rare photos, articles and memorabilia from the Rock & Roll Hall of Famer’s archive.

Members also will receive the first of a series of exclusive CCCC CD releases, this one featuring a previously unreleased soundtrack Wakeman recorded for the 1984 sci-fi film She.

CCCC members also will get a 10% discount off all purchases made from the Wakeman Music Emporium online store, and will receive invitations to special events, access to exclusive merchandise and more.

Fans who join the club this month will receive a 15-month membership for the price of a one-year membership.

“As a musician, I think it is important that serious fans get to hear music that would otherwise be left in drawers and on shelves and in some cases, discarded,” Wakeman says in a statement. “With the formation of the CCCC, I feel that this is an innovative way for core fans to get to hear music which I have discovered in various of my archives.”

In other news, Wakeman just launched the U.S. leg of his Even Grumpier Old Rock Star Tour on Wednesday, but he also announced some changes to his itinerary and the postponement of several dates. Check out updated details at RWCC.com.