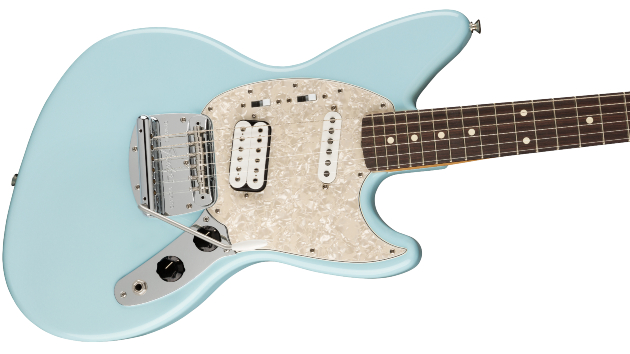 Fender is bringing back the Kurt Cobain Jag-Stang, a new guitar that the late Nirvana frontman created with the company back in the early ’90s. As Fender EVP of Product Justin Norvell tells ABC Audio, the collaboration first came about thanks to Cobain’s penchant for destroying guitars.

“Kurt was not the most precious with his guitars back in the day,” Norvell recalls. “He would smash a lot of guitars, need guitars repaired.”

“Through that Fender formed a relationship with Kurt and the Nirvana camp,” he explains. “And just within that, Kurt started to throw ideas, [saying], ‘I’ve been drawing this dream guitar of mine for a while.'”

Those drawings, which can be seen in the posthumously released Cobain book Journals, combined elements of two different Fender guitars: the Jaguar and the Mustang. It was that hybridization that really caught the attention of Fender, which normally only built signature guitars with artists based on preexisting models.

“For an artist to actually have a vision for a complete guitar — that was a completely new guitar and a whole encapsulated idea — was fascinating,” Norvell says.

When Cobain died in 1994, the Jag-Stang was still in the final stages of development and received only a limited release. Now, Fender’s finally reissuing it widely to celebrate the 30th anniversary of Nirvana’s Nevermind.

The Kurt Cobain Jag-Stang is available now via Fender.com. To celebrate the launch, Fender has added 11 Nirvana songs to its Fender Play guitar instruction app.