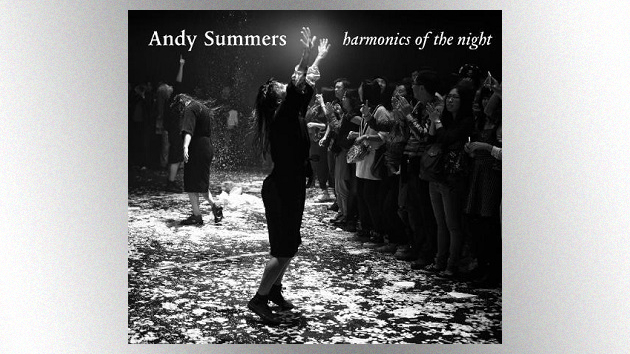 Earlier this year, Police guitarist Andy Summers revealed to ABC Audio that he planned to release a new solo instrumental album in the fall titled Harmonics of the Night. Now full details about the project have been unveiled.

The album, which features 12 tracks, will be released this Friday, October 15, on CD, as a digital download and via streaming services.

Summers considers Harmonics of the Night the third in a trilogy of instrumental solo records, following 2015’s Metal Dog and 2017’s Triboluminescence. He recorded the album at his Hill of Beans studio in Venice, California, and co-produced it with longtime collaborator Dennis Martin Smith.

The 78-year-old Rock & Roll Hall of Famer also shot the photos featured on the album’s cover and in its packaging.

Andy says lead track “A Certain Strangeness” was written as a sound installation to accompany his 2019 photo exhibit of the same name that opened in Montpellier, France.

“Bringing the two mediums together was a natural move and from that first piece came this whole new recording,” Summers explains. “In a word, it set the mood for the rest of this album.”

Andy has released a track called “Chronosthesia” as Harmonics of the Night‘s first single, which is available now digitally. You can check out a music video for the tune at Andy’s official YouTube channel, featuring photos Summers shot in downtown Los Angelesm along with superimposed footage of Andy playing guitar.

Harmonics of the Night also will be released as a two-LP vinyl set boasting three tracks not included on the CD or digital versions.

In August, Summers published his first fiction book, Fretted and Moaning: Short Stories, which is available at AndySummersBook.com.

Here’s the Harmonics of the Night CD and digital track list:

Side A
“A Certain Strangeness”

Side B
“City of Crocodiles”
“Aeromancer”
“Chronosthesia”
“Harmonics of the Night”

Side A
“Mirror in the Dirt”
“Prairie”
“Fantoccini”
“Aphelion”

* = appears on LP version only.