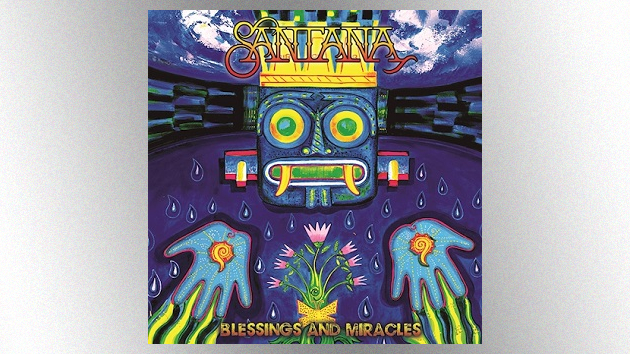 “Joy,” which was co-written, produced and sung by Stapleton, combines elements of reggae, rock, country, blues and gospel music.

“I was very intrigued to work with Chris,” Carlos says. “We talked on the phone about the Covid situation and how there’s so much fear in the world, and I said, ‘We need to create music as a healing force. We must bring hope and courage and disinfect twisted minds infected with darkness.’ That gave him the ammunition to write such incredible words.”

He adds, “Somewhere I said, ‘flying on the wings of angels,’ so it’s a collaboration. And what an incredible song it is. The choir in it — it’s like the Staple Singers.”

“Joy” is available now via digital formats, and you also can check out a colorful, animated lyric video for the tune at Santana’s official YouTube channel. The clip brings images from the Blessings and Miracles cover art to life.

Blessings and Miracles, which can be pre-ordered now, will be released this Friday, October 15.

As previously reported, the album features Carlos and his band teaming up with an eclectic variety of guest musicians. The three other tracks that already have been released from the record are a cover of the Procol Harum classic “A Whiter Shade of Pale” featuring Steve Winwood; the new Rob Thomas collaboration, “Move“; and “She’s Fire,” song written by acclaimed songwriter Diane Warren that also features singer-rapper G-Eazy.