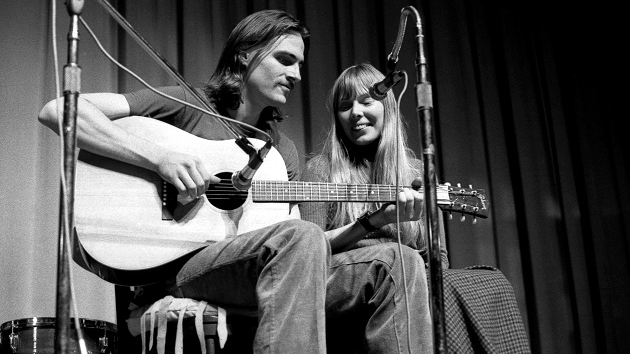 A rare duet between Joni Mitchell and James Taylor, featuring the famed singer/songwriters performing Taylor’s song “You Can Close Your Eyes” in October 1970 at a concert at London’s Paris Theatre, was released digitally for the first time today.

The entire London Theatre performance, which featured Taylor joining Mitchell for the second half of the show, is one of a few full-length concerts that will be included on Joni’s forthcoming archival box set Joni Mitchell Archives Vol. 2: The Reprise Years (1968-1971), due out on November 12.

Taylor, who was dating Mitchell at the time of the London concert, had recently written “You Can Close Your Eyes” for Joni. He wound up recording his own version of the tune, which appeared on his classic 1971 album Mud Slide Slim and the Blue Horizon.

Mitchell’s Paris Theatre show originally was broadcast in December 1970 on the BBC Radio program In Concert, which was hosted by famed British DJ John Peel.

In an interview with Cameron Crowe that appears in the Archives Vol. 2 liner notes. Joni reflected on performing with James in London.  “That’s when we were dating,” she recalled. “He really locked up to my dulcimer, playing great with his guitar. Those two instruments together sound great. It sounded like one instrument. Musically, we were a great couple.”

As previously reported, Joni Mitchell: Archives Vol. 2, which you can pre-order now, is available as a five-CD set and a limited-edition 10-LP vinyl collection that features previously unreleased live, studio and demo recordings from Mitchell’s early career, leading up to the release of 1971’s Blue.