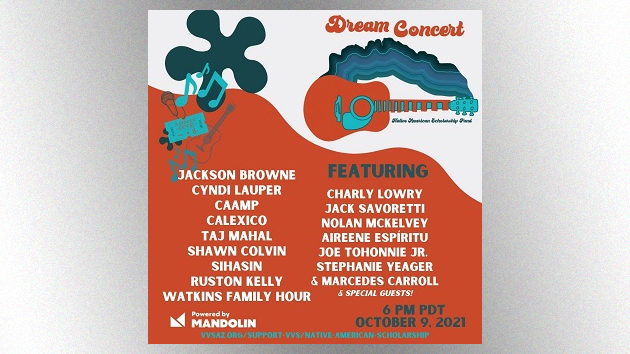 Jackson Browne will headline the 2021 edition of the Dream Concert, a virtual charity event that will stream live on October 9 at 6 p.m. PT via Mandolin.com.

Browne originally launched the event as an annual in-person concert in Sedona, Arizona, to support the Verde Valley School Native American Scholarship he created in 1990.

Other artists on the Dream Concert lineup include Cyndi Lauper, Shawn Colvin, Taj Mahal and many more. Early-bird tickets can be purchased now for $10 at Mandolin.com; the price will increase to $20 on the day of the show. People also can donate additional money to the cause at the website. For more information about the school and the scholarship fund, visit VVSAZ.org.

In other news, Browne is scheduled to launch the second leg of his joint 2021 U.S. tour with James Taylor on October 16 in New Orleans.  The trek is mapped out through a December 13 concert in Buffalo, New York.

Browne released his latest studio album, Downwhill from Everywhere, in July. Last week, he issued a new single from the record, “Until Justice Is Real.”  That song also is featured in a teaser trailer for a new documentary called How Does It Feel to Be a Problem? that focuses on racial injustice in the U.S.