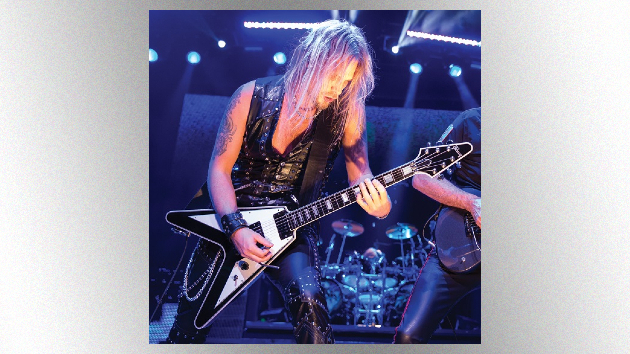 The update comes from his partner, Mariah Lynch, who took to Instagram on Tuesday to say, “Thank you to everyone for all your messages.”

Alongside a photo of the couple with their one-year-old daughter, Daisy Mae, Lynch wrote, “Richie underwent major emergency heart surgery. He is stable & resting. If you know him, you know how tough & strong he is. So tough that he finished the show & kept the hair flips coming.”

Lynch added, “There’s no one like him. We’d be lost without him #HotDad.”

Priest frontman Rob Halford also took to social media to spread the “good news.” Sharing a photo of the guitarist, he wrote, “Good news metal maniacs as you may have seen via Ritchies beautiful @mariahklynch our Falcon is stable and resting after undergoing extensive heart surgery.”

The health update comes just one day after the band announced they were postponing their tour due to Faulkner’s health.

“It is with deep regret that we have to postpone the rest of our U.S. tour,” Judas Priest said. “Richie Faulkner has major medical heart condition issues which have landed him in the hospital where he is being treated. In the meantime, we are all sending love to our Falcon to wish him a speedy recovery… As soon as we have any updates from the doctors on when we can reschedule the dates, we will of course announce them.”