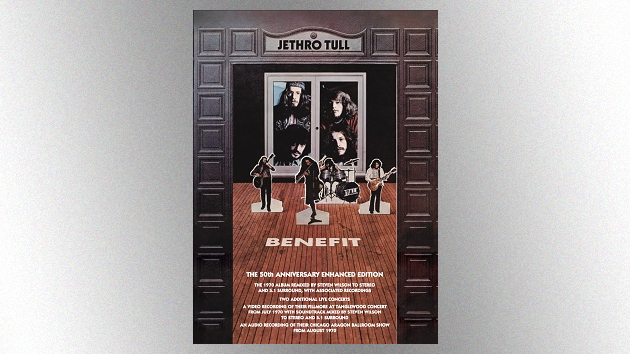 Jethro Tull will belatedly mark the 50th anniversary of their third studio album, 1970’s Benefit, by releasing an expanded, four-CD/two-DVD version of the record on November 5.

The DVDs feature high-res versions of Wilson’s 2013 remix of Benefit and associated tracks, a video of the 1970 Tanglewood concert, and more.

The reissue also comes packaged with a 100-page book, featuring a new essay about Benefit; commentary about each of the album’s tracks from frontman Ian Anderson and former Tull members Martin Barre, Glenn Cornick and Clive Bunker; and interviews with Benefit studio engineer Robin Black, executive producer Terry Ellis, and others.

Released in April 1970, Benefit peaked at #11 on the Billboard 200 and #3 on the U.K. album chart. The record included one hit U.K. single, “Witch’s Promise,” which reached #4 on the chart. The album’s best-known song in the U.S. likely is “Teacher,” which went on to become a classic rock radio staple.

Benefit has gone on to be RIAA-certified Gold in the U.S. for sales of over 500,000 copies.

You can pre-order the deluxe reissue and check out the full track list at BurningShed.com.