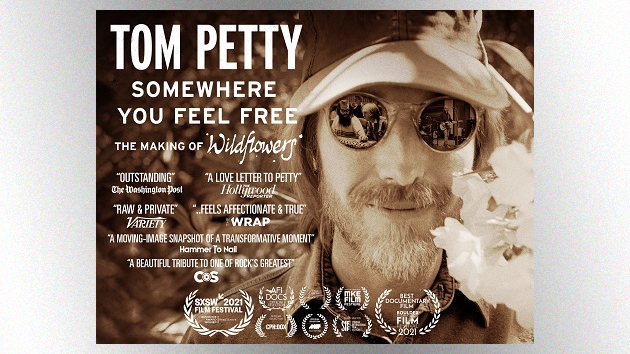 The new documentary Tom Petty, Somewhere You Feel Free: The Making of Wildflowers, which premiered this past March as part of the virtual South by Southwest Film Festival, will get its theatrical release as a global screening event on October 20 — coinciding with what would’ve been Tom Petty‘s 71st birthday.

The movie focuses on the creatively fruitful period from 1993 to 1995, during which Petty made his acclaimed 1994 studio effort Wildflowers and recorded many other songs that weren’t initially released on the album. The film features previously unseen footage shot during the making of Wildflowers, as well as new interviews with producer Rick Rubin and Heartbreakers guitarist Mike Campbell — who co-produced the album with Tom — as well as with Heartbreakers keyboardist Benmont Tench.

The archival footage not only captures Petty in the studio, but on tour and with his family at home.

In additional to the October 20 screenings of Somewhere You Feel Free, the film will be shown at select theaters on October 21. Visit TomPettyFilm.com to find out where the documentary is playing and to purchase tickets. Then, later this year, the movie will get its worldwide release as a free streaming event in 4K resolution on Petty’s official YouTube channel as part of the YouTube Originals series.

You can check out a preview clip from the documentary on YouTube now that includes archival footage of Petty recording the Wildflowers track “Only a Broken Heart,” as well as recent footage of Rubin, Tench and Campbell chatting about the song.

An expansive Wildflowers box set titled Wildflowers & All the Rest, which featured a bevy of outtakes from the sessions, was released last year.