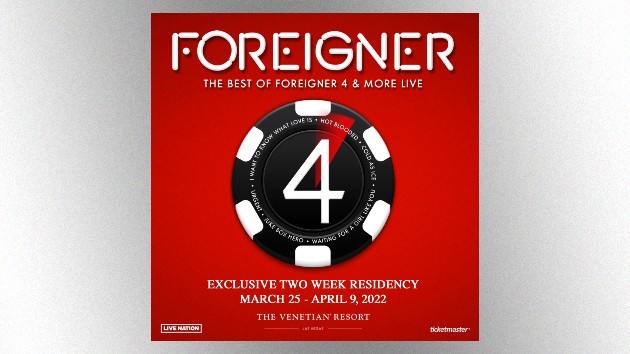 In early 2020, Foreigner played a series of dates at in Las Vegas at The Venetian Theatre inside The Venetian Resort Las Vegas. It was supposed to be the first part of a two-part residency, but of course, those later shows never happened due to the pandemic.   Well, the band’s now making up for lost time.

Starting March 25, 2022, Foreigner will take over the venue with their show The Best of Foreigner 4 Live, celebrating the 40th anniversary of their biggest-selling album, 1981’s 4.

The band’s Vegas shows in 2020 featured all the hits from 4, including “Waiting for a Girl Like You,” “Juke Box Hero” and “Urgent,” as well as some deep cuts like “Night Life” and “Girl on the Moon.”  Most of the band’s other hits — from “Cold as Ice” to “I Want to Know What Love Is” — were also on the set list.