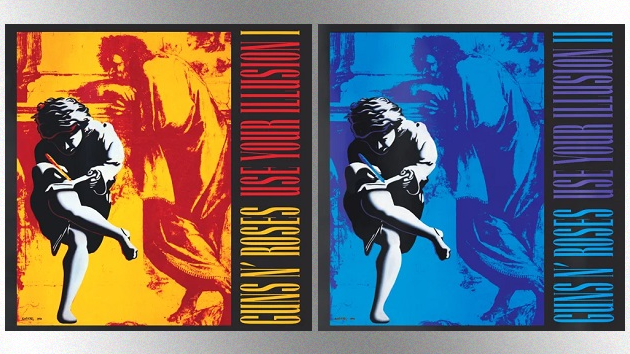 With the band riding high after the massive success of its 1987 debut, Appetite for Destruction, and its popular 1988 follow-up, G N’ R Lies, Use Your Illusion I and II debuted at #2 and #1 on the Billboard 200 chart.

Former GN’R drummer Matt Sorum, who joined the group just as they were starting to record the albums, tells ABC Audio that most of the band initially thought they were going to make a single record featuring 12 or 13 songs.

Sorum says it also was Rose’s idea for the two albums to have identical covers, with the only difference being the color schemes — Use Your Illusion I is red and yellow and II is blue and purple.

Each album features a well-known cover song — Paul McCartney & Wings‘ “Live and Let Die” and Bob Dylan‘s “Knockin’ on Heaven’s Door” appear on I and II, respectively. GN’R’s version of “Live and Let Die” peaked at #33 on the Hot 100.

The albums both have gone on to be certified seven-times platinum by the RIAA for amassing seven million sales units.

And here’s the Use Your Illusion II track list: