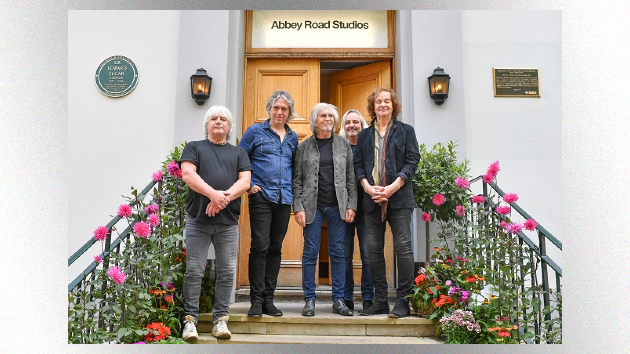 This Saturday, The Zombies will return to London’s famed Abbey Road Studios, where the British Invasion legends recorded their classic 1968 album Odessey and Oracle, to play a special concert that will be streamed live worldwide.

The show, which will begin at 3 p.m. ET, will be viewable at the Veeps.com streaming platform.

Zombies frontman Colin Blunstone tells ABC Audio that the band will be playing in Abbey Road’s historic Studio Two, where The Beatles did most of their recording.

Regarding the set The Zombies have planned, Blunstone says, “We’re gonna be playing many hits, but lots of deep cuts too, and five new songs. And three of those songs, we’ll have strings with us.”

The Rock & Roll Hall of Famer adds, “[I]t’s gonna to be really exciting. Obviously, we’ve never done anything like this before.”

The new tunes are part of an upcoming album that the group is recording. Colin also notes that the band will be playing about four songs from Odessey and Oracle, which was recorded mostly in Abbey Road’s Studio Three.

Odessey and Oracle was the last album made by The Zombies’ original lineup, and the band actually broke up before its release. The album includes the group’s signature tune “Time of the Season.”

Following the streaming concert, Blunstone and Zombies co-founder, keyboardist Rod Argent, will take part in a remote Q&A with acclaimed rock journalist David Fricke. The band mates also will take questions from members of the virtual audience, including some surprise celebrity guests.

Tickets to watch the concert cost $20, while tickets offering both the show and the Q&A are priced at $35. More expensive bundles that include a T-shirt and/or a poster also are available. Tickets and bundles can be purchased at Veeps.com.